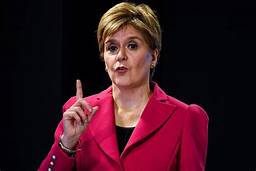 THE SNP and Nicola Sturgeon look set to convincingly win the upcoming Holyrood elections in May but are at risk of failing to win an outright majority, according to recent polling.

The Additional Members System (AMS) is designed to encourange cross-party co-operation and prevent one party from gaining a majority. However, the SNP ‘broke’ this system in 2011 by winning more than 50 per cent of seats in the Scottish Parliament.

With under two months until the Holyrood elections, 46 per cent of Scots are planning to vote for the SNP in the constituency vote, according to an Opinium poll conducted between March 11 and March 16.

In the regional list vote, support for the nationalists drops to around 42 per cent, which could give them 64 out of 129 seats – one short of a majority.

Due to the fact that the Green party are set to gain at least six seats, this means that there will still be a pro independence majority in parliament.

The poll also revealed that 51 per cent of Scots would support independence – against 49 per cent who say they would opt to remain part of the United Kingdom.

Opinium found that when voters were asked about the upcoming Holyrood elections, the SNP would get 46% of the constituency vote, Conservatives 24%, Labour 20%, Lib Dems 6% and the Greens 4%.

When casting their second vote for a representative for the electoral region, the poll puts the SNP on 42%, Tories on 22%, Labour on 19%, the Greens on 7% and Lib Dems on 5%.

While still giving the SNP a clear lead, the 46% who say they would vote for the SNP in their local constituencies represents the lowest proportion for the party in any poll since the 2019.

Every poll of 2020 recorded the SNP share of the constituency vote above 50%, peaking at 58% in September and October, suggesting that the SNP’s recent troubles, namely the Alex Salmond enquiry, have harmed their chances.

Voters across Scotland are split in their voting intentions, both in party preference and how to place their second vote as part of the regional list system.

Waitress and student Iona Brownlie, 21, is an undecided voter in the Stirling constituency.

She said: “I’m undecided as to who I’m voting for, I usually always am but this year is even more confusing.

“This past year has been so confusing when it comes to politics and I can’t help but think that moves made by MSPs have been politically motivated because they know there’s an election coming up.

“For example, the £500 to all NHS and care workers that wasn’t going to be taxed – I’ve read reports that have shown it was in fact taxed and people were genuinely surprised they’d even received it.”

Abigail Taylor, 23, is a digital journalist who will be casting her vote in the Western Isles.

She said: “I’ll be voting SNP this election due to the impacts of coronavirus and because I believe they have Scotland’s best interests at heart.

“I think that the opposition parties don’t have any ground here. The Scottish Labour Party are basically dead and the Lib Demss struggle to gain any traction.

“I live in a SNP stronghold so really, even if I didn’t vote for them, they are most likely to be elected.”

David King, 26, from Melrose, is a lorry driver who will vote for the Conservatives in the south of Scotland.

He said: “I’m voting Tory because they’re the only credible opposition to the SNP.

“It’s so important to focus on the issues that really matter, including the NHS and education. Pursuing another independence referendum should not even be on the agenda at the moment.”

KFC worker Lewis Fraser, 22, said: “I’m an independence supporter and I’ll be voting for the SNP with my constituency vote in Inverness in May.

“I believe that is the only option with my first vote and are likely to do very well in constituency voting. My second vote is more difficult due to the voting system, making it very difficult for the SNP to win list seats.

“I’ll be voting Action for Independence with my second vote to hopefully have as many independence supporters in Holyrood as possible.”